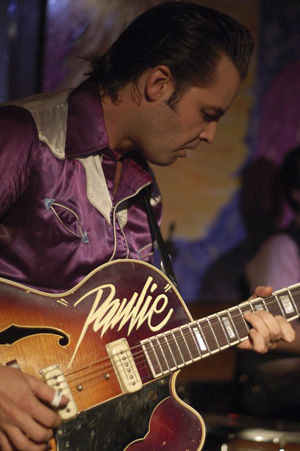 How long have you been playing your instrument ?

I meddled with the guitar in primary school when I was about 10 or 11 but they wanted to teach me to read music and play Twinkle Twinkle Little Star. That wasn’t for me. I wanted to learn Chuck Berry or Bill Hailey riffs, so I tossed it in. I’d been watching too much Happy Days I guess. Years later I decided to have another go in tech school. I was into anything that had a rockin’ guitar in it when I was an early teen. Black Sabbath, Rolling Stones, AC/DC, ZZ Top, Cold Chisel, Van Halen, Devo. I could go on. I was also sitting down watching countdown and picking up loads from that. I soon traced all that back to roots music. The blues and early rock’n’roll, country and RnB. I guess I was about 14 or 15 when I decided to play guitar. I’ve now been going at it for a little over 20 years. The more I play, the more I want to play, and the more I realise I’m just learning. I’m still trying to work out all the same stuff….

How do you write a song ?

I never find it easy. I also like to keep things simple. I sometimes get a vocal line in my head and go from there, see where that leads me with a feel or a riff. I sometimes just get a riff and build from there. I like to write music to other peoples lyrics in the band also. I like to find something in the lyrics that does it for me and then build. I keep a book of lyrics, bits and pieces. When it comes time to bring new stuff to the table I get into my book and try and turn it into something. I like hooks,riffs and grooves…and I like building. Two of my favourite songwriters would be Hank Williams and Willy Dixon.

Who are your influences ?

I like most music and the list grows every day…. My mum had Stones and Beatles records and may dad had Chuck Berry and Duane Eddy records. I would read who wrote these songs and go and by records by Muddy Waters or Hank Williams. I discovered Elvis with Scotty Moore on guitar, wow.. All the old electric blues greats like Ike Turner, Little Walter, Hound Dog Taylor, Johnny Guitar Watson and Elmore James. I then discovered the early rockabilly and rock’n’roll gear, Chuck Berry, Johnny Cash, Bo Diddley, Johnny Burnett’s Rock’n’roll Trio, Gene Vincent, Eddie Cochran and Buddy Holly. I discovered Buck Owens and Don Rich, George Jones and ol’ Hank and just loved it. All this music was real to me and I could feel it. Then there’s the guys that are out there now doing it, The Fabulous Thunderbirds, Jimmie Vaughn, Junior Watson, Junior Brown, James Harman, Hot Club of Cowtown, Dwight Yoakam, George Thorogood, Dale Watson, Wayne Hancock, Rod Piazza, Dave Biller, Redd Volkaert. I then still had my school yard influences, Malcolm and Angus Young, Eddie Van Halen and the more hard rockin’ stuff. Australian artists also have played a big part in the way I play. They are the guys I get to go and watch. Red Rivers, Dan Nosavich, Ian Moss, Peter Baylor, Ben Peters, Jeff Lang, Roy Payne, James Black or Charlie Owens. There is plenty of good gear out there both young and old. I can learn from them all…

I have only played in a hand full of bands. All roots bands.. Pub gigs from the age of 17 and only a few gigs before that. A band in the late 80’s called TrouserSnake I had with some school friends for a few years doing electric blues and rock ‘n’ roll type stuff. I played guitar and slide and had a great time learning the ropes of gigging in pubs and running a band. In the early 90’s after that I had a three piece band witch I fronted on vocals and guitar. I enjoyed the short stint on the vocals but was then offered a gig in Rocket 88 on guitar with Rockbottom on vocals and harp. A band I was already into at the time and doing the odd fill-in with anyway. A great band. A great rhythm section.. Ray Tully and Don Shepard. The other guitar player in that band was Stewie Hughes and it was great to lay down rhythm and play off of him and Rockbottom. I lasted about five years and Rocket 88 closed shop. I wanted to write songs and play a style of my own, or a blend of the styles I loved in the way that I played. I then formed Rockbottom James and the Detonators with some of my favourite players….Now I’m in The Detonators. I currently also play in a county/hillbilly band called Gatorbait and do the odd fill in around town with Sweet Felicia and the Honeytones.

I’ll have Willy Dixon on bass, Louis Prima can be the front man and blast out on the trumpet, Malcolm Young or Rob Riley on rhythm guitar, Otis Span on the piano and Earl Palmer on the drums. What a crazy band.. I would be happy to play with anyone as long as its good. 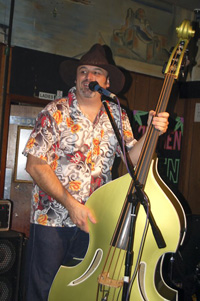 />
How long have you been playing your instrument?

I’ve been playing bass since I was about 19 or so.I started out on an electric bass which I bought for $100 just jamming with some mates but changed to double bass after I joined my first band.(the drummer in that band was a young bloke called Eddie Fury!) Prior to that I played the Tenor Horn at school it was the only subject I ever got an A for.I got into heaps of trouble for memorizing songs and not reading the music which to me was too hard when I could easily remember the tune,I used to pretend I was reading to keep the peace with the teacher who used to watch me.I was even in the school marching drum band for a while.

How do you write a song?

I’ve got stacks of songs half written in a folder.Some get morphed into other songs some sit there waiting,I mght use a verse out of one and some are just crap.They start off as poems I suppose and either myself,Paul or the whole band will mould them into a song. Normally I see people or hear of people doing something a bit unusual,different or weird and I use that as a basis for a song. Being on tour a fair bit and hanging around pubs and festivals can be good for that type of inspiration. I’m not big on the love song boy meets girl,the girl’s not interested type of thing its been done to death as far as I’m concerned. I’d rather write a song about something left of centre. Go listen to a Steve Earle,Don Walker or Hank Williams song to see what I mean.

Who are your musical influences?

I remember hearing stacks of Creedence on the radio when I was young and playing Mum and Dads Bill Haley records so I have always been into roots music probably by default rather than by trying to get into it.The Stray Cats, George Thorogood,Stevie Ray Vaughn,Dave Edmunds,Creedence,AC/DC,The Rolling Stones and Rose Tattoo were my favourites during High School and I suppose that drove me to finding out who some of their influences were.I bought some blues records by Muddy Waters and another from John Lee Hooker,an Elvis Sun session tape. From those records as well as my own collection of other stuff I soon discovered bass players Willie Dixon,Dorsey Burnette,Bill Black,Geordie Leech,Jerry Scheff,Tommy Shannon,Lee Rocker,Nick Lowe, Keith Ferguson and Noel Redding.Locally here in Melbourne I used to go and see Graeme Thomas playing slap bass with The Straight 8’s as well as Ian Hayes who was in a variation of the Straight 8’s called the Longhorns and the Dancehall Racketeers who actually taught me how to slap a bass.

What types of music have you played?

I have played in quite a few bands and I’ve done a bit of recording for some other artists as a session player which I really liked.But its all been strictly roots stuff mainly rockabilly and early rock n roll,I’ve played in a few blues bands and lately there’s been lots of country thrown into the mix which I’m right into.

Who would you like to play with,even if they aren’t still around?

I’d like to play in Johnny Cash’s early band or maybe Hank Williams and The Drifting Cowboys back when things weren’t so complex. A jam with Jimi Hendrix would be a great experience so would playing with The Fabulous Thunderbirds. 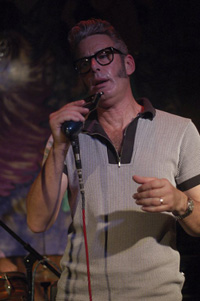 How Long on tools?

’ve been working on the harmonica for 35 years now, as a teenager I remember hearing harp on Canned Heat’s “On The Road Again” and the Doors “Roadhouse Blues” and thus began the journey to unlock all those sounds.
How Do you write songs?

Songwriting for Rockbottom James is a slow process, however most of my work is started with the riff in my head and the addition of lyrics later. There are a couple of songs where the melody and words arrived together. On a band level once the raw framework is up, the song is beaten into shape by reviewing demos, adjusting lyrics, keys and by playing it live.

What are your influences?

Anything that jumps, rocks or swings, all the Harp ‘A’ list players from the 1950’s through to the present, in particular Big and Little Walter, George Smith, Kim Wilson, Rod Piazza, Charlie Musselwhite.

Before The Detonators I worked with the Melbourne based Rocket 88’s for over 16 years.